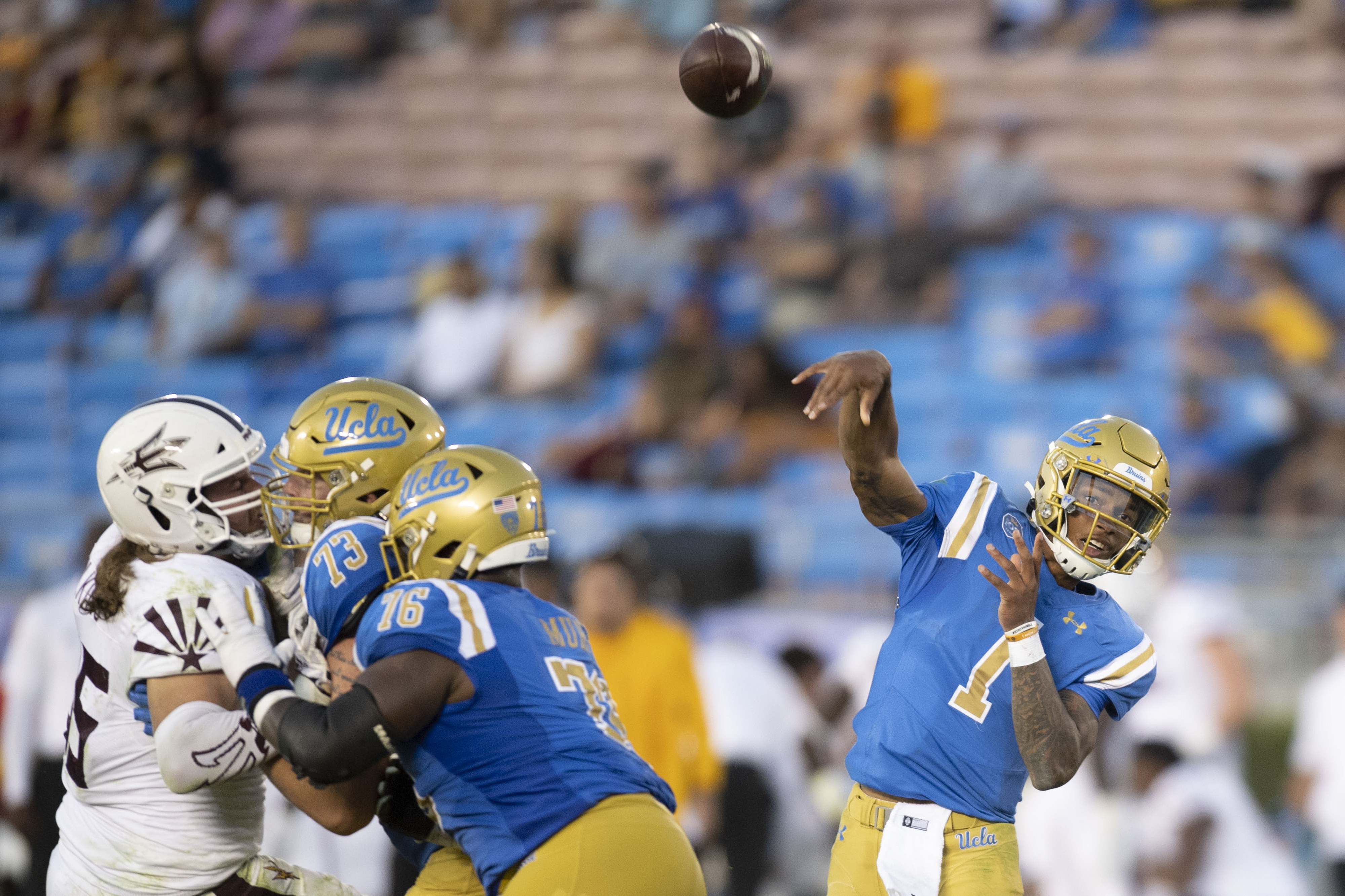 The 2019 UCLA football campaign was disappointing, to say the least. The Bruins went 4-8 overall, with their only wins coming from conference play. And to make matters worse, the team closed out the year on a 3 game losing streak, with an average loss margin of 24. It was the 2nd year of the “Chip Kelly experiment” down in Pasadena. If history has shown anything, the longest Kelly has held a coaching position was 4 years in 2009-12 with the Oregon Ducks. This 3rd year is vital. Either Kelly needed 3 years to build a culture and program, or the Bruins might once again have to look elsewhere.

In an eyeball test, the offense showed more promise than the defense last season. The Bruins averaged nearly 27 points per game, which was the middle of the pack in the Pac 12. 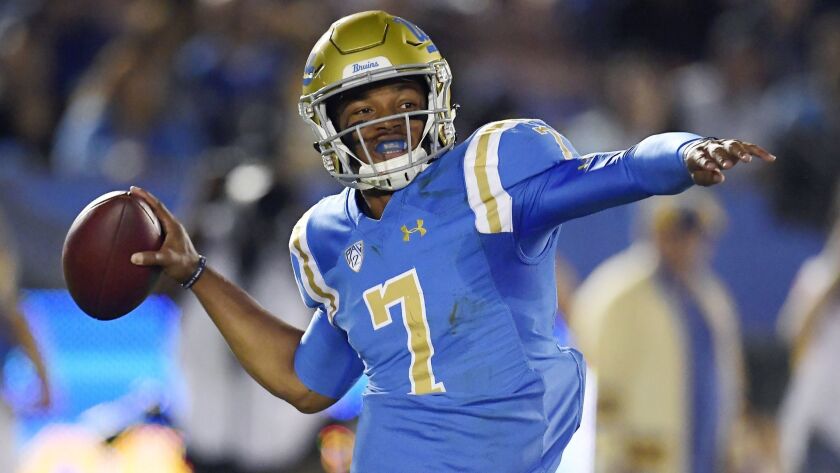 The quarterback is the most important position in an offense, and the Bruins have someone that can get the job done; Dorrian Thompson-Robinson. As a Bruin, he has a career 4012 yards, 28 touchdowns and 16 interceptions, with a 130.5 QBR. The junior also made the Maxwell Award watch list, after his record-breaking sophomore campaign. In a single season, a few of his stats made top 10 in program history; 21 touchdowns (10th), 2899 total yards (10th), and 216 completions (9th). Thompson-Robinson also set a school record of 564 yards of offense in a 32 point late-game comeback win at Washington State. Not only can he get it done through the air, but he is mobile enough to stretch drives. Last season, he ran for at least 35 yards in 7 games, which joins Josh Rosen, Cade McMown, and Brett Hundley as the only other Bruin quarterbacks to be that consistent. If Thompson-Robinson can’t handle the added pressure, the Bruins can turn to Colson Yankoff to take center, the transfer from Washington.

The running back is another high point in the Bruin offense. Demetric Felton is suited up for another year and is the program’s lead rusher. Felton should be a workhorse on the offense and has already he can handle that responsibility. In his sophomore year, he only had a total of 27 rushing yards. Last season however, that number skyrocketed to 331 total rushing yards. Joshua Kelley, another Bruin back, was drafted in the 4th round by the Los Angeles Chargers in the 2020 NFL Draft, so prepare for Felton to have even more touches. Felton has proven to be a quality runner but is also more than capable of being an option at receiver. He averaged over 10 yards a reception per game in both his sophomore and junior campaign. Last season, Felton also set a school record for receptions in a season by a back (55). Finally, he is on the preseason Paul Hornung watch list. Similar to the quarterback, the Bruins can switch it up and go with another option, Britain Brown, the transfer from Duke. The only issue is that Brown ended with a season-long shoulder injury, so his reps may be diminished due to that.

The Bruins can go many different options with their choices at wide receiver. Kyle Phillips set a school record for catches in a season by a freshman (60). Jaylen Erwin is a nice second option and was a standout at Hutchinson CC, where Erwin was named to the All KJCCC All-Conference team in both 2017 and 2018. Or the Bruins can turn to the freshmen coming in, like Logan Loya. The 4 star from Garden Grove, CA had offers from Nebraska, Oregon, and USC. ESPN ranks Loya as a top 40 wideout in the nation. In his final year at St John Bosco, he had 72 receptions for 1109 yards and 9 touchdowns. To make things more promising, St John Bosco, was the number 1 ranked HS team in the nation.

Finally, the offensive line as a whole has shown to hold their own against defensive lines of all varieties. Jake Burton and Sean Rhyan are a great pair at tackle. Per PFF, Burton was the highest-graded player for the Bruins at 79.3 (43rd in the nation). When Burton and Rhyan are lined up together, they have the 40th best run-blocking unit in the country. Duke Clemins has shown to be versatile enough to be either the Bruins’ center or guard. While the Bruins’ offense showed signs of potential, the defense leaves with questions. The unit was last in the conference in interceptions (5). For comparison, Oregon was first in the conference with 20. Because of the comparison outcry, the Bruins decided to part ways and get a new DB coach in Brian Norwood. Back in 2017, Kansas State was last in the Big 12 in yards allowed. In 2018 in Norwood’s debut, the Wildcats jumped to 4th in conference for yards allowed. It’s clear that the Bruins saw what Norwood did and want a similar result. The Bruins also addressed the secondary with incoming talent like the transfer from Stanford, Obi Eboh, or incoming freshmen John Humphrey and Jake Newman. Will the secondary improve with the new coaching hire and incoming fresh talent?

The defensive unit was 3rd in the conference in fumbles (17), and middle of the pack in sacks (27). Pretty solid numbers overall, that could have an upside. Osa Odighiziwa is going to be the linebacker, anchoring the line. The problem is after Odighiziwa, who is the Bruin’s second option? They lost a lot of starters in the linebacker unit who graduated. Will Carl Jones make a promising sophomore jump after doing quality work? Another question; how can incoming JUCO linebacker Caleb Johnson best be utilized at the Pac 12 level? Johnson, a high 3 star, is ranked the 2nd best inside linebacker in the nation. Or, will the Bruins look to youth and gravitate towards their recruiting class. Damien Sellers is seen as the 14th best outside linebacker in the country, who had offers from Alabama, Florida, Oregon, Michigan, and Texas. One thing is for certain, the Bruins gave up 35 points per game, so whomever the Bruins decide to roll with, has to make that number go down.

As a whole, due to COVID-19 making college football conference-only, the Bruins have the potential for 4 or 5 wins. They have games like Arizona and Oregon State that look to be headed towards the win column. Inversely, games like Cal and Utah present more problems than solutions. The rest are toss ups and hard to predict until the Bruins get some games under them. They had a huge comeback win vs Washington State – will that repeat? If the offense and defense are vastly improved, a win vs Colorado or Stanford is possible; but if the team performs how they did last year, not as likely anymore.

Enjoyed this article? Bookmark SidelinesSports.Net (Ctrl+D) on your browser and check back daily for new content!