The pageantry and tradition of college football is why so many people prefer it to the NFL. While the quality of play may be less, the long standing rivalries and unique school cultures that evolve from college play are absolutely unbeatable. While everyone’s favorite college football tradition is going to be the one from their school, we’ve tried to make a neutral list of the best traditions the sport has to offer. Agree with our picks? Disagree? Let us know on our Twitter @Sidelines_SN. 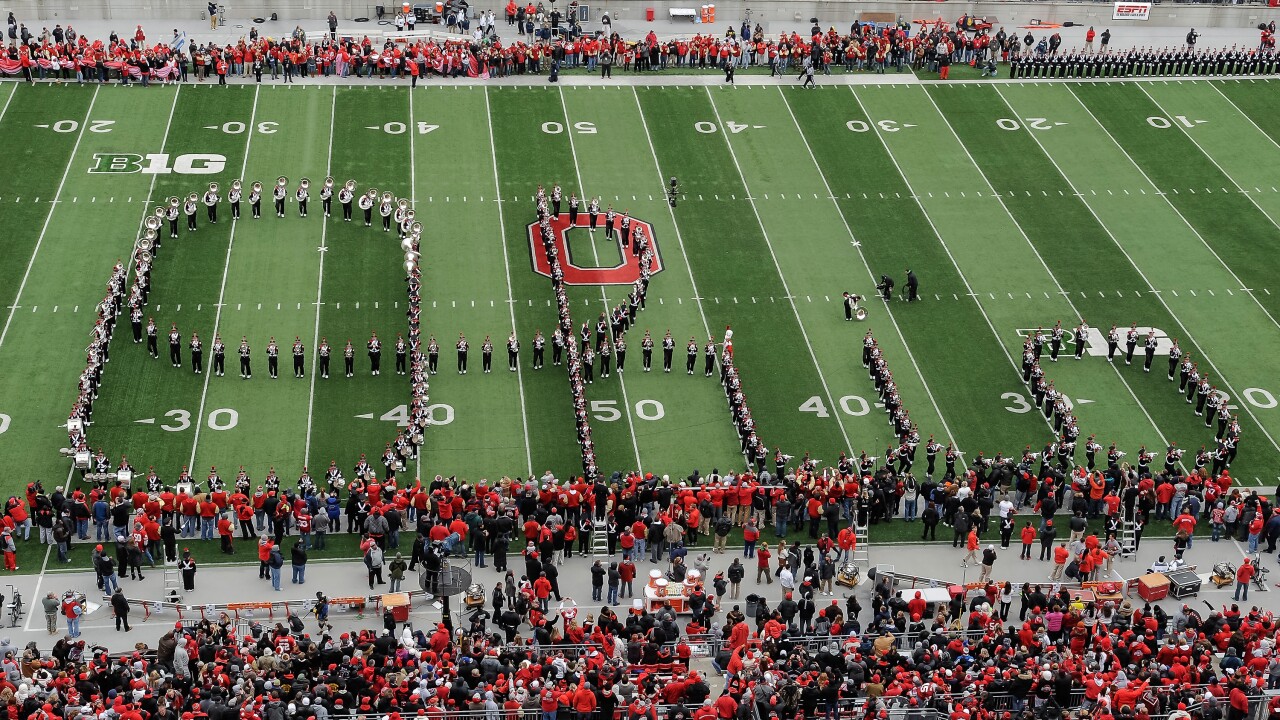 Script Ohio was first put on the field in 1936. But, it wasn’t until the game against Michigan that year that the band director asked a sousaphone player to take the spot of glory. Since then, it’s always been a senior or fifth year sousaphone player (with the exception of some special guests, like Woody Hayes and John Glenn) tasked with the big moment. After they dot the i, they high five the drum major and bow to both ends of the stadium. The Ohio State Band is arguably the best college marching band in the country (or The Best Damn Band In The Land, as they’re referred to) and this tradition is undeniably one of the best.

Jump Around is so ingrained in Wisconsin Badger culture, it’s surprising that it’s one of the younger traditions on this list. Jump Around actually started in a game against a Drew Brees led Purdue. October 10, 1998, as Purdue was trying to drive the ball into the end zone in an extremely close game, the entire Wisconsin student section erupted when House of Pain’s hit blared on the speakers. This energetic tradition has shaken the stadium at the start of the 4th quarter ever since. 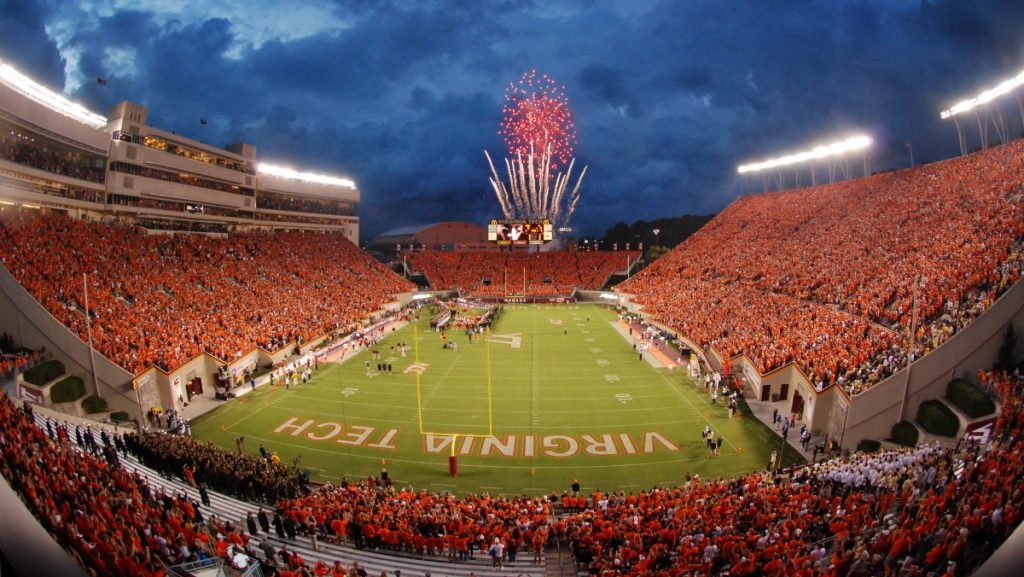 When Virginia Tech installed their new scoreboard in 2000, they wanted a new, hype entrance song to go along with the reveal. “Enter Sandman” was chosen over “Welcome to the Jungle” and Sirius, and the electric entrance theme never went away. Many label it the best entrance in college sports – but other strong contenders make this list. 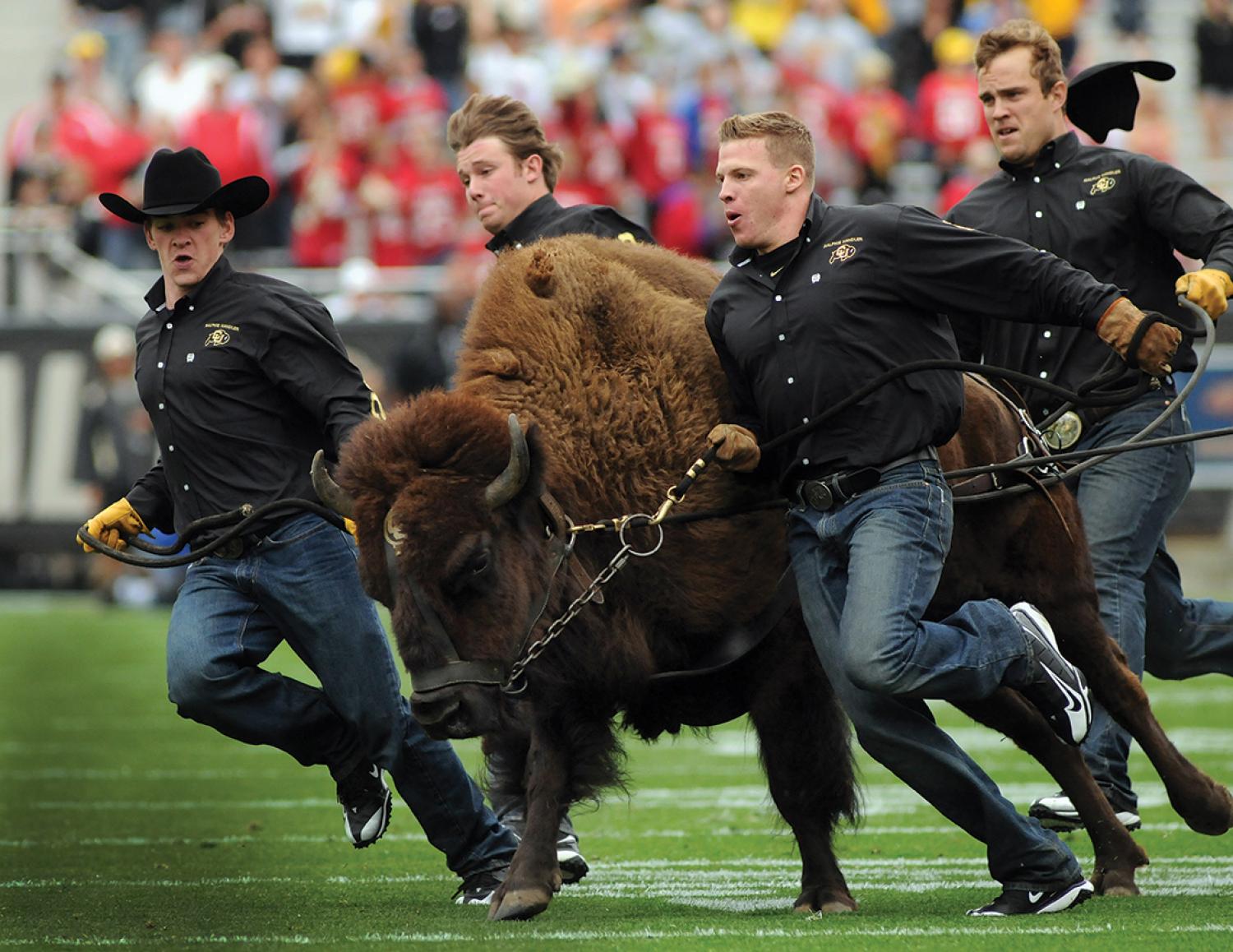 Ralphie’s Run is chaotic and beautiful, just like college football. Watching Ralphie pound down the field as his handlers hold on for dear life is absolutely incredible. There’s really nothing like the uncontainable force of a buffalo, and that’s what puts this tradition so high on our list. 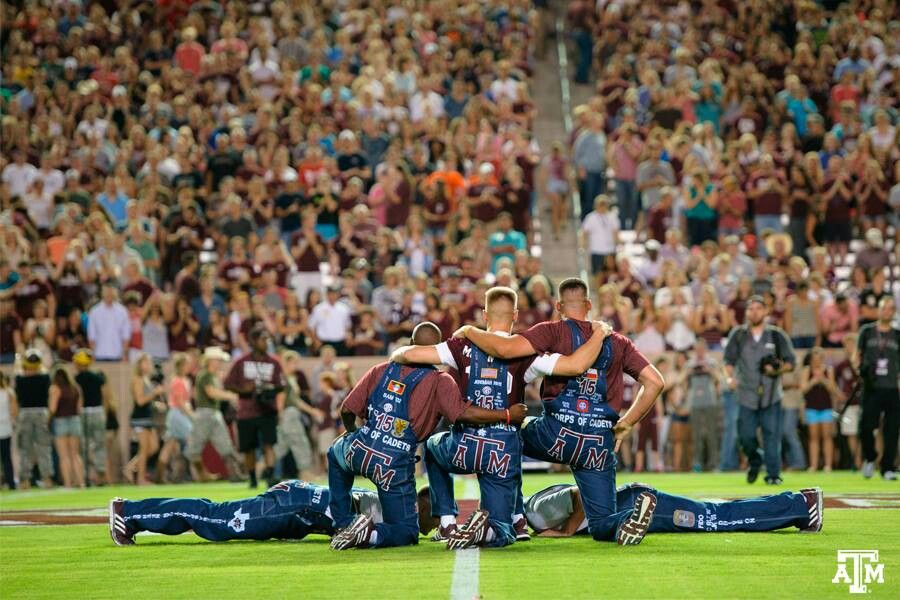 Texas A&M was obviously going to make this list in some way, with the longstanding traditions they have. But Yell Practice is truly unique, with Kyle Field filling up at midnight the night before games. If you’ve been there, you know there’s nothing like it. It’s simultaneously reverend yet bursting with energy. And practice truly makes perfect – the 12th man is one of the loudest game day crowds. 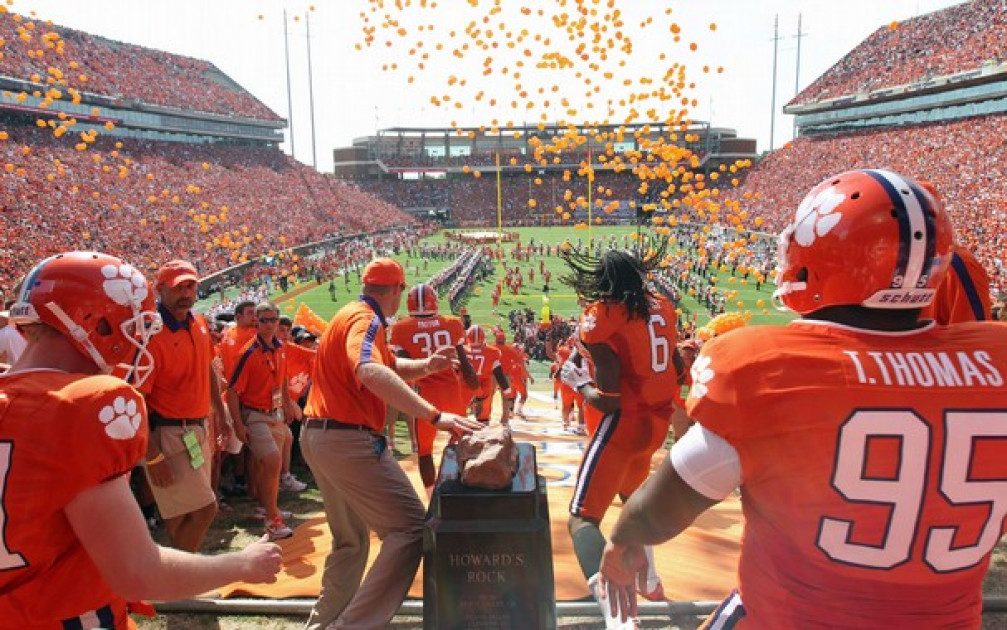 Nothing quite like an entire football team sprinting down a steep hill to get the crowd going. But, rubbing the rock before the run is definitely the coolest part of this tradition. The rock was sourced from Death Valley, California (the name-sake for the stadium, or at least what it’s affectionately referred to as). Coach Howard used it as a doorstop then told booster Gene Willimon to “get rid of it”. He got rid of it by putting it on a pedestal in the east end zone, where it stands today and is rubbed by every player as they run onto the field. Toomer’s Corner is the gateway to Auburn University, but it’s known for its large oaks that get draped in toilet paper after any big Tigers win. It’s debated when this tradition truly began, but most believe it was in 1972 after a win over rival Alabama. The trees were actually poisoned by an Alabama fan in 2010 in one of the most notorious sports-related crimes ever, but have since been replaced. The corner still gets “rolled” after big wins – especially against the Crimson Tide. 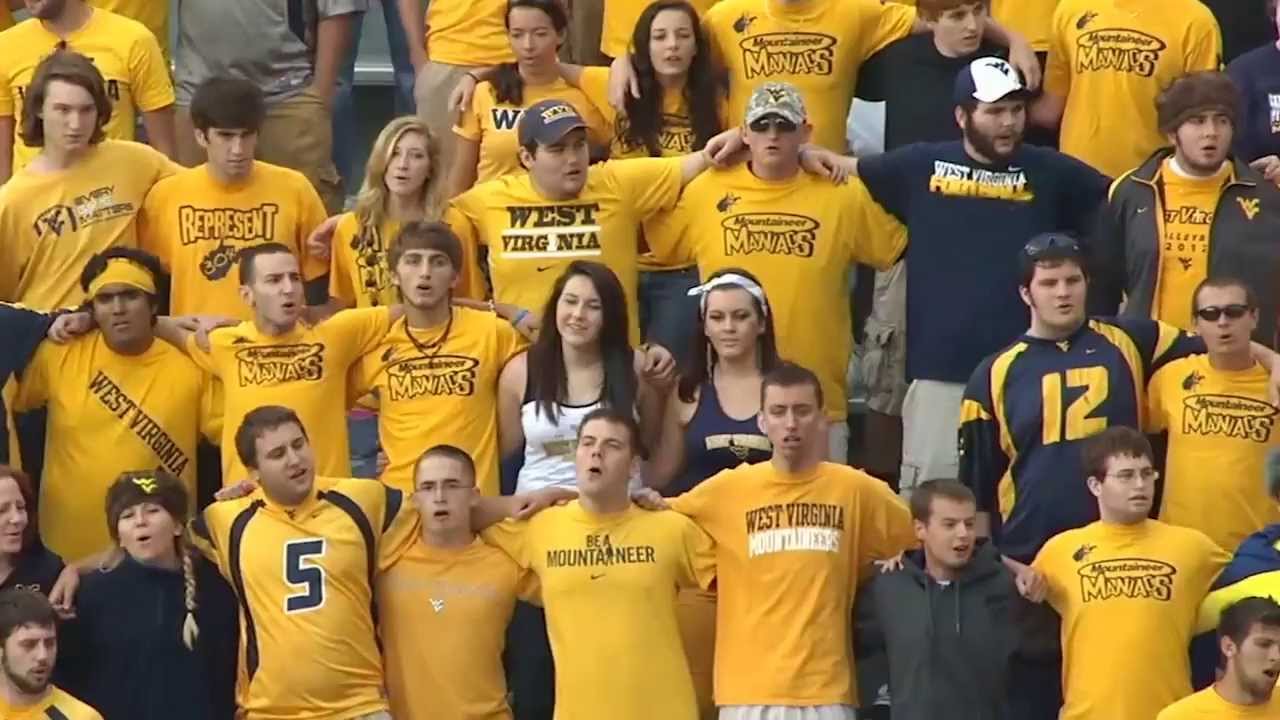 Arguably the most beautiful of college football traditions, Mountaineer fans sing John Denver’s hit after every home victory. The sound of a stadium full of fans singing the sweet country ballad fills the heart, and has made it one of the most beloved traditions in the sport. Fun Fact: John Denver himself performed the song on field in 1980 to commemorate the new stadium’s opening. 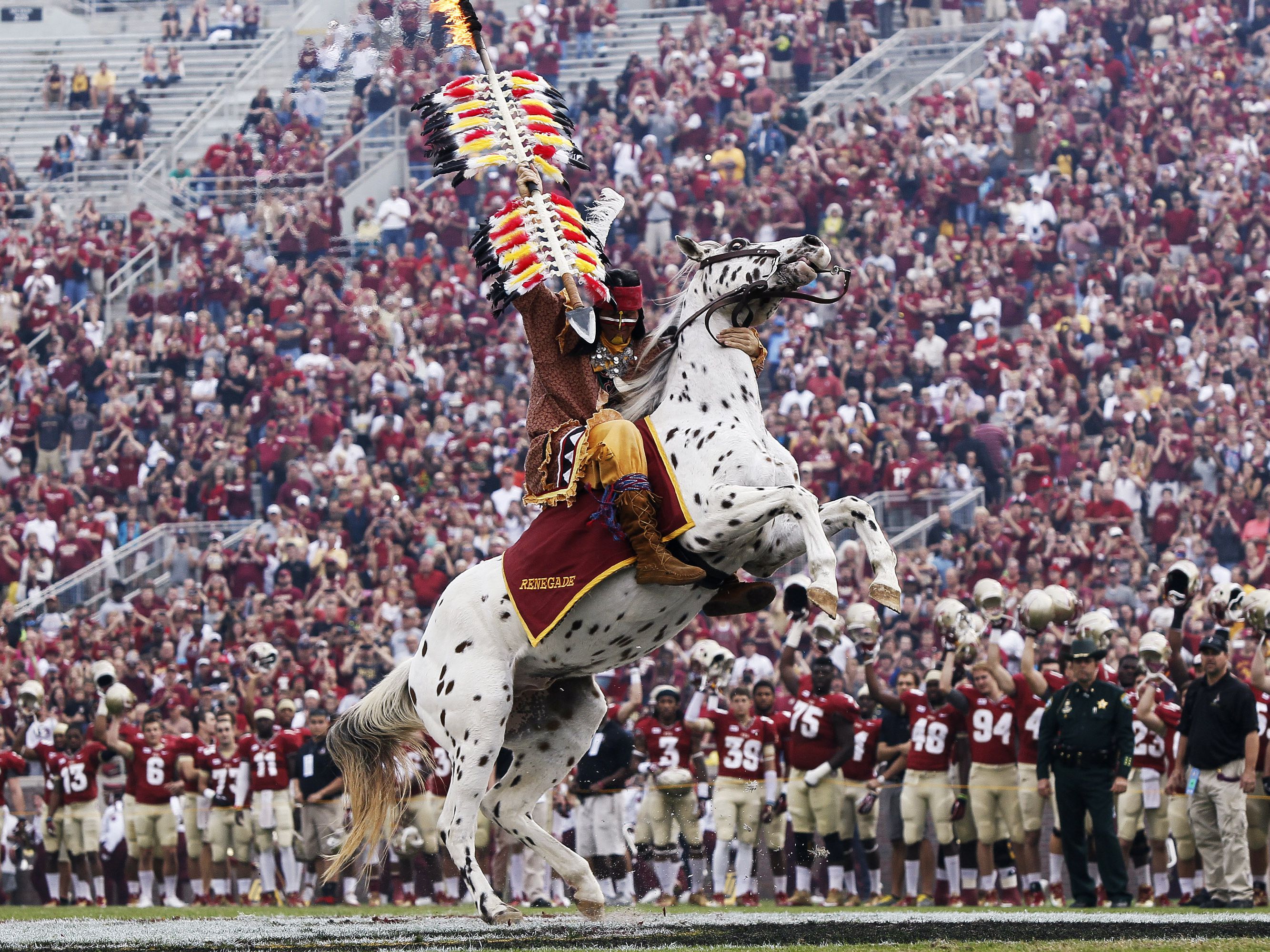 While many schools have shifted away from Native American mascots due to our nation’s difficult past and how they were treated, Florida State instead worked with the Seminole nation to ensure they could use the branding as a way to promote the tribe’s incredible history and preserve their way of life. Chief Osceola is perhaps the best symbol for this; him and his horse Renegade run onto the field before every game and plant the spear in the ground. The mascot pair debuted in 1978 and has been claiming ground for the Seminoles – both Florida State fans and the Native American nation – ever since.

At its core, college football is American. It’s something born in this country that hasn’t been replicated anywhere else. With that, Marching In at the Army-Navy game is the epitome of college football traditions and the sport itself. The entire student bodies of both West Point and the Naval Academy march in strict order onto the field. This not only demonstrates the discipline of these cadets, but the longstanding history behind the most American rivalry in sports.